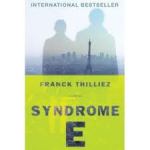 This giveaway has ended.  The winner will be announced shortly…

The Viking Press has provided a copy of Franck Thilliez and Mark Polizzotti’s book Syndrome E as a giveaway for The Booklover!  The classic procedural meets cutting-edge science in this international bestseller.  Syndrome E tells the story of detective Lucle Hennebelle, whose friend has developed a case of spontaneous blindness after watching an obscure film from the 1950s.  Hennebelle enlists the aid of Inspector Sharko, who has connected the film to five murders.  Soon the two find themselves in the middle of a conspiracy that crosses politics, religion, science, and art while also crossing the globe.

Now for the giveaway rules:  There are two ways to enter, first you can leave a comment on this post letting me know the name and author of your favorite thriller.  The second way to enter is by subscribing to this blog.  Current subscribers are already entered — they only need to leave a comment to get a second entry!

I will use random.org to choose one winner and will contact them by email.  It is important that you leave your email address if you leave a comment.  Note: There are a maximum of two entries per person.  The giveaway ends on Sunday, July 1st and the winners will be contacted by email on Monday, July 2nd.  This contest is open to U.S. addresses only. 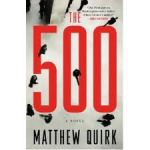 There is a new thriller writer on the block!  The 500 is a fast-paced read, reminscient of The Firm by John Grisham.  The book opens with a Range Rover and Sig Sauer in the first paragraph – need I say more?

Mike Ford grew up learning from small-time con men, one of which was his father.  Leaving that world behind was at the top of his list and he had worked hard to get to law school and prove his worth. Mike, fresh out of Harvard Law School, lands a dream job with the Davies Group, a political consulting/lobbying firm in Washington, D.C.   Everything comes with a price as Mike soon learns, and that price can be steep!  It isn’t long before the Davies Group’s rising star, is enemy number one, and is being pursued by some of the world’s most elite criminals.

This book doesn’t really read like a first novel, which makes it that much more enjoyable and the plot is complicated enough to keep you interested.  I recommended this book to my Dad – he loved it and anyone who likes a good, fast-paced thriller will find this book hard to put down.

How much do you love books?  Enough to smell like them?  Well, Gerhard Steidl has created a fragrance based on the smell of books.  The new fragrance is call Paper Passion and is available for $115 at steidl.com.  The fragrance comes complete with novel-inspired packaging.